To share your memory on the wall of Jerry Russell, sign in using one of the following options:

Jerry Lamar "Tuddy" Russell 77,, of Savannah, formerly of McRae, died on Tuesday, October 27th, 2020, at his residence in Savannah.

Jerry Lamar "Tuddy" Russell 77,, of Savannah, formerly of McRae, died on Tuesday, October 27th, 2020, at his residence in Savannah.

Tuddy was a former owner of Talent Tree Staffing Services, a disc jockey with WDAX for many years and was owner of various radio stations, served in the United States Air Force. He was a member of the First Baptist Church in Fernandina Beach, Florida.

He was preceded in death by his parents, Dennard L. (Jerry) Russell and Ruby Long Russell.

Flowers will be accepted or donations may be made to the Humane Society of the United States.

Lowe’s Funeral Home of Helena is in charge of the arrangements.
Read Less

To send flowers to the family or plant a tree in memory of Jerry Lamar "Tuddy" Russell, please visit our Heartfelt Sympathies Store.

We encourage you to share your most beloved memories of Jerry here, so that the family and other loved ones can always see it. You can upload cherished photographs, or share your favorite stories, and can even comment on those shared by others.

Donna and Hugh Hodges, Faye Carter, and other have sent flowers to the family of Jerry Lamar "Tuddy" Russell.
Show you care by sending flowers

Posted Oct 31, 2020 at 09:01am
Love and prayers from Hugh and Donna Hodges . So many fond memories with Tuddy and Lynne from the Ga/Fla games, to the beach house and New York City.

Donna and Hugh Hodges purchased flowers and planted a memorial tree for the family of Jerry Russell. Send Flowers

Flowers were purchased for the family of Jerry Russell. Send Flowers

Posted Oct 30, 2020 at 02:42pm
Lynn, we are terribly sad that we can’t make it to the funeral. You know I desperately want to be there. Covid has hit our family and we wouldn’t dare put others at risk. You and Jerry have been great friends to Wayne and me for many years! We have had so many amazing memories with you two. I wish I could give you the biggest hug! We both know he is loving on Weezer and Lucky in heaven! Because we share the love for animals we have donated to the Humane Society in Jerry, Weezer and Lucky’s honor! Xoxo!
Comment Share
Share via:
FC 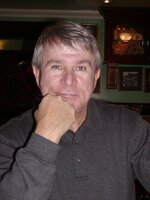