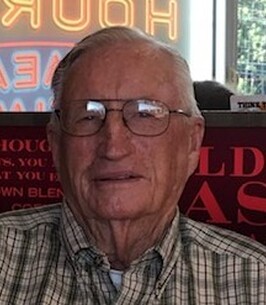 Johnny Carl Brewer
Johnny Carl Brewer, age 85, of Lumber City, passed away of natural causes at his residence on August 16, 2021.
Mr. Brewer was preceded in death by his parents, William Jefferson and Mary Lou Oliver Brewer, and his infant sister, Mary Elizabeth Brewer.
Mr. Brewer was born in Telfair County on January 5, 1936, on the Brewer farm and attended school in Lumber city and graduated high school at Workmore. He first attended collage at ABAC and took all available forestry class before transferring to the University of Georgia where he received a Bachelor’s Degree in Forest Management on June 9, 1959. He worked for Gair Woodlands and Continental Can Company for a while before active duty in the National Guard. In July of 1960, he began his career with the U. S. Forest Service in California as a Junior Forester on the Tahoe National Forest. He worked as Timber Management Assistant and was promoted to Assistant District Ranger on the Mendocino National Forest and later promoted to District Ranger on the Shasta Trinity National Forest In 1970 Mr. Brewer returned to the Southeastern District and took a job as District Ranger on the Francis Marion National Forest in South Carolina. From there he moved to Atlanta Georgia where he worked as a Program Budget Specialist and was responsible for assigning the 1979 $100,000,000 regional budget. In 1977 he was promoted and took a job as Assistant Supervisor of the National Forest in Alabama. While in Alabama, he retired in 1985 as a GS-13 with over 27 years of service, and returned to Telfair County where he started his business as a Consultant Forester with Woodland Management Services.
Mr. Brewer was the rock of his family. He was married to his wife, Donna, for over 61 years. He loved the outdoors and his passion was in the field doing forestry work. He has been a member of the Society of American Foresters for 62 years.
Graveside services will be held at 11:00 A.M. on Thursday, August 19, 2021, at Dodge’s Chapel Cemetery. Rev. John Daughtry will officiate.
The family will receive friends and family from 6:00 P.M. until 8:00 P.M. on Wednesday, August 18, 2021, at Lowe’s Funeral Home.
Lowe’s Funeral Home staff and family respectfully ask all in attendance to please wear a mask and follow social distancing guidelines.
Survivors include his wife, Donna Chapman Brewer, of Lumber City; 4 children, Leigh Ann Brewer (Ander) Cowart of Lumber City, Bryan C. Brewer of Orlando, Florida, William Jeff (Donna) Brewer of Eastman, Trisha (Adam) Lee of Lumber City; grandchildren, Heather Brownlow (Jason Gore), Josh Brownlow, Chase Miller, Jenna Brewer (Daniel) Ivey, Chelsea Brewer, Alexa Smith, Anna (Omar) Roman, Maggie Brewer, Jonathan Brewer, Blake Adams, Delaney Lee; 7 great-grandchildren; 1 brother, Joe (Lynn) Brewer of Centre, Alabama; several nieces and nephews also survive.
Please express your condolences at lowesfuneralhome.net.
Lowe’s Funeral Home of Helena is in charge of arrangements. In lieu of flowers the family requests contributions to Community Hospice Foundation, P. O. Box 2277, Vidalia, Georgia.

This obituary is protected by copyright by Lowe's Funeral Home. Proudly Serving the Communities of McRae, Helena, Milan, Scotland, Lumber City, Jacksonville, and Alamo. Lowe's Funeral Home is located in the state of Georgia, United States.

All rights reserved. This obituary is also archived at obittree.com